C# Interactive is a handy tool for quickly running a piece of code, either line by line or from a script.

The C# Interactive window in Visual Studio is opened from:

Type in one block of C# at a time, terminating with a ; when the block is complete, eg: 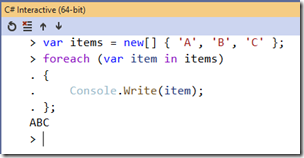 The same code can also be executed from the command line, without running Visual Studio.

Open the Developer Command Prompt for Visual Studio (which will ensure required paths are set-up for you).

Start the C# Interactive Compiler, with the csi command.

Enter code as for the C# Interactive window, above:

The code can also be saved in a script, eg demo.csx:

This can be run in the C# Interactive window using the #load command, eg:

which will immediately run the script:

Note that the C# Interactive window uses a search path starting at C:\Users\name whereas you might expect it to start from the root of your project.

You can change this by running:

This is slightly easier from the Developer Command Prompt, where you can just change the path to the root of your project before starting csi, eg:

To reference assemblies use:

Whether the path is relative or absolute will depend on the context, as for #load, above.

The #r command can be used when working line-by-line, or added to the top of a .csx script.

I'm a C# software developer based in Brighton.

Particulary interested in new development as a freelancer or contractor